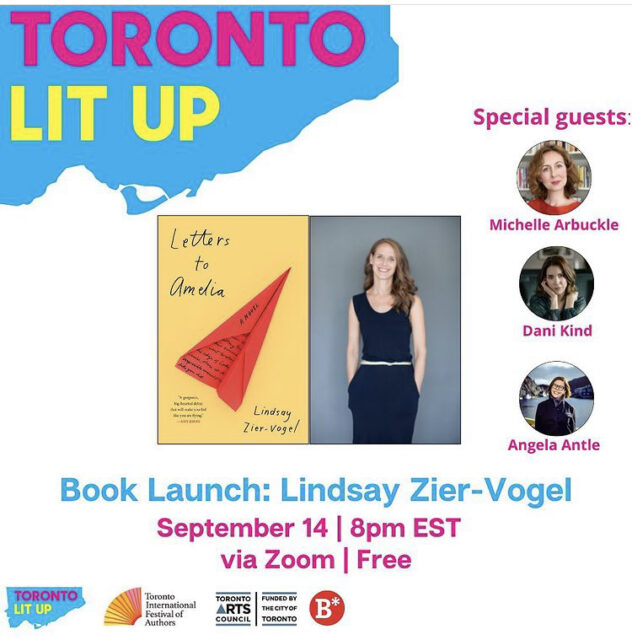 Toronto Lit Up and Book*hug Press invite you to join Lindsay Zier-Vogel for the virtual launch of her debut novel, Letters to Amelia. Hosted by Michelle Arbuckle, and featuring a reading by Dani Kind of Netflix’s Working Moms, and an interview moderated by CBC Radio’s Angela Antle.

Tuesday, September 14, 2021
8:00 pm ET via Zoom
Free to attend. All are welcome.
Closed captions will be available.Pre-registration for the Zoom webinar is required.
Register here:

Books will be for sale by Book*hug Press. Reserve your copy of Letters to Amelia here, or pre-order from your local independent bookseller.

Reader: Dani Kind has spent the last six years splitting her time between filming two-time Emmy nominated Netflix hit, WORKIN’ MOMS and SYFY’s people’s choice award-winning WYNONNA EARP. She has recently been nominated for her Canadian Screen Award for best lead actress in a comedy alongside Catherine O’Hara. Kind took home the best actress award for her role in the short film YELLOW LINES. She can be seen supporting opposite Peter Sarsgaard in Veena Sud’s THE LIE for Blumhouse, which had its world premiere at TIFF and starred as the lead of Blue Ice Pictures’ thriller BANANA SPLITS.

Interviewer: Angela Antle writes and produces CBC Radio and TV documentaries and she’s Chair of the St. John’s International Women’s Film Festival. Her work has been recognized by the Gabriel, Gracie Allen and Atlantic Journalism Awards. She directed the documentary Gander’s Ripple Effect: How a Small Town’s Kindness Opened on Broadway and wrote the feature-length documentary Atlantic: What Lies Beneath which won awards at the Dublin, Chagrin, Nickel and Wexford Film Festivals and screened worldwide; including at the Berlin Film Festival.

Moderator: Michelle Arbuckle is the Director of Engagement & Education at the Ontario Library Association, Chair of the Book & Periodical Council, as well as Chair of the BPC Freedom of Expression Committee which organizes Canada’s annual Freedom to Read Week. She is a librarian by trade and has worked with Ryerson University Library, the Canadian Music Centre and Princess Margaret Hospital. In her early library days she also drove the bookmobile at the Elgin County Library, a job that required her to drive by Kentucky Fried Chicken every day around lunchtime and was thus, her favourite job ever.

Toronto Lit Up:
This launch event is part of Toronto Lit Up, a multi-year initiative, started in 2016 by the Toronto International Festival of Authors and the Toronto Arts Council, to spotlight Toronto writers and empower local artists with career-building opportunities. Between April 2016 to December 2020, Toronto Lit Up has produced 107 events to launch 131 books by 177 Toronto authors. Toronto Lit Up book launches take place throughout the year at venues across the city. They are open to the public and free to attend. Learn more here.

About Letters to Amelia:

Grace Porter is reeling from grief after her partner of seven years unexpectedly leaves. Amidst her heartache, the thirty-year-old library tech is tasked with reading newly discovered letters that Amelia Earhart wrote to her lover, Gene Vidal. She becomes captivated by the famous pilot who disappeared in 1937. Letter by letter, Grace understands more about Amelia while piecing her own life back together.When Grace discovers she is pregnant, her life becomes more intertwined with the aviation hero and she begins to write her own letters to Amelia. While navigating her third trimester—amidst new conspiracy theories about Amelia’s mysterious disappearance, the search for her remains, and the impending publication of her private letters—Grace goes on a pilgrimage of her own.

Underscoring the power of reading and writing letters for self-discovery, Letters to Amelia is, above all, a story of the essential need for connection—and our universal ability to find hope in the face of fear.